This post on my blog QA2100.com is in reference to a great post highlighted by Jaden Turner’s share on 2015 Hospital Hacks: and posted into our Group on Linked In:  QA2100 Testing Strategy: Financial Services

Every week we are hearing about another leak, hack or break-in and millions of credit card holders are exposed, at risk, or invaded.   Who are these hackers?  Why are they hacking?  Money.  Greed. Something for nothing.  Retribution.    All of which is Vicious, Criminal and
destructive to infrastructure, commerce, and consumer confidence

Security – is this an oxymoron? We hear it, and aretaught to believe it, so we tru

st that others are responsible about implementing it. Real Security means real testing dollars are spent beyond the boundaries of a new project launch… Usually only the minimal security testing is considered if at all. If it is, is usually not part of projects, rather it is part of the ‘network’ group, or ‘infrastructure’ group.

So, this is not about the kind of job our network guys are up to, rather the kind of budget that gets allocated to supporting enough security measures, plus the budget to ensure it is being implemented and maintained at a deep enough or broad enough level. This means maintenance, and keeping up with the latests shenanigans by our nefarious ‘hackers’.

I have the same issues with performance testing. and automation for regression.

So I could go on, but these areas are allowed to get weak due to higher priority profit making budgets. and on and on until an emergency effort to shore up security is done again. Security = Insurance. If you don’t spend the money on the protection, it won’t be there when you need it.

This is the tip of the IceBerg and we need to be vigilant, and attentive to the looming prospects of risk.

Interested in getting the best bang for your buck with BPM Product Design, Development, Strategy, Testing, and Implementation?

Give us the opportunity to provide you with our assessments.  We have USA resources, and fully experienced offshore capacities for development, testing and delivery.

We have lived it for over 8 years and provided some of the finest products in the Insurance and Banking Industries.

The behavior of many BPM service based applications are governed by business process and workflows which are defined by business rules. These business rules must be validated during application testing. For many firms, testing business rules is a costly and complicated process which involves business users and testers. QA 2100 has invested in state-of-the-art automated BPM test methods and tools integrated by Pega Systems into PegaRULES Process Commander®
(PRPC) V.X and Test Management Framework, Bonita, and other opensource BPM products. Within the framework of PRPC, and BPM products is a process of design which utilizes not only business process, but a Requirements Definition tool which clarifies the Requirement process. This process turns use cases based on requirements into design, thus providing fundamental testing paths for automated testing of the BPM framework. This allows you to develop an application using a design based upon business rules, use cases, best practice development and quality principles.

Test Automation Using QA 2100 BPM Testing Toolkits
QA 2100 takes business rules validation testing one step further by automating the creation of test scripts using parameterized data and automating the execution of test cases. For example, QA 2100’s accelerator can execute 65 rule validations in 1.1 minutes using automation, versus 32.5 hours for manual execution. We use the Automated Unit Testing functionality within Pega PRPC to help you build a series of test cases to satisfy test requirements defined by the business requirements and use cases. These test cases are the foundation for automated test scripts. Automated test scripts can be built to pass from workflow to workflow, thus describing a partial or complete path through the application for scenario or end-to-end testing.

With the use of Test Management Framework (TMF), and other Test Repository tools, use case steps and parameters as described within the automated test scripts can be satisfied using the Scenarios and Suites features. The Scenarios and Suites test the behavior of the application and verify compliance with the original requirements. Besides providing significant savings in cost, time and efforts, automation lets you run many more tests during your testing process as a suite to provide hands off BPM Testing results.

Boundary Testing
QA 2100 provides boundary or negative testing of the business rules in the BPM framework and process to confirm the effectiveness of rule sets by requesting conditions that don’t exist. This helps ensure the business rules engine returns the correct value or an appropriate error. These boundary tests are set up as part of the actual application within each workflow.
QA 2100 has experience with automated tools to accelerate testing and improve accuracy
Employing automation tools to test and validate business rules adds breadth and depth to your testing efforts. By using pre-defined testing parameters, hands-off automation methodologies, and innovative solutions, you can accelerate and simplify a complex process.

END_OF_DOCUMENT_TOKEN_TO_BE_REPLACED

There is always just a little bit more tweaking to do…. 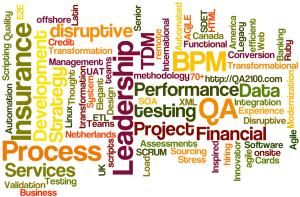